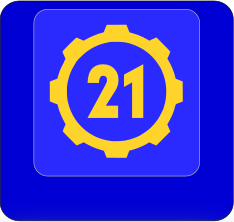 Vault 21 is a Vault-Tec vault that was once hidden under Las Vegas, Nevada. It has since been converted into a hotel/casino and acts as one of many sources of income for Mr. House and his young New Vegas empire.

Located in downtown Las Vegas, Nevada, Vault 21 was a unique Vault experiment: everyone in the vault was equal, it was created with a perfectly symmetrical layout, and the dwellers settled their differences via games of chance. Reliance on luck to solve problems created what might be considered the perfect realization of anarchy: a society in which everyone is equal and no one has an advantage over the others. Vault-Tec ensured that every person admitted to the vault when it first sealed was a compulsive gambler and were unable to decline when Vault-Tec personnel running the vault informed them that this was how the vault was to be run. The original dwellers then passed on their lifestyle to their children and so on.